This year Berkshire YFC decided to fully take part in National Young Farmers Week. This was the 2nd time National have done this and the aim of the week is to increase membership of Young Farmers by 10%. Last year we did not take part so this year a week long programme of events was organised.

Monday was Bowling at MFA Bowl in Thatcham, Tuesday was learn a new skill night at Brightwalton, Wednesday was normal meeting night for all clubs, Thursday was a quiz at Hamstead Marshall, Friday was a farm walk and talk at Rushall Farm. 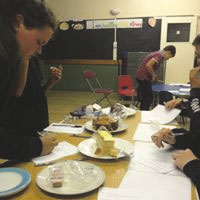 The week started off with over 40 members coming to bowl along with some of their friends they had brought along. It was a fantastic start to the week. The learn a new skill night was less well attended but those that did learnt to cake stock judge and make corn dollies. On the normal meeting night Bradfield had a talk on hot air ballooning and Newbury and Shefford teamed up for a tour around Newbury racecourse. Bradfield learnt the ins and outs of how to fly a balloon and what flying a balloon involves. Newbury and Shefford had a tour of the royal box, the weigh in rooms and saw the jockey’s dressing rooms. Thursday was also less well attended but the quiz was excellent and lots of ideas for future events were given. Friday night’s meeting was very popular with members. We had a tour of the farm and got to meet lots of animals as well. 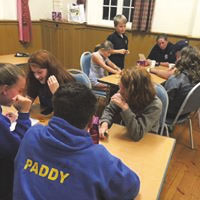 Thank you to everyone who made the week possible. Hopefully we gained some members for all our clubs and it definitely raised the profile of Berkshire YFC through social media. Jess Elliman was chosen as one of Chris Manley’s (NFYFC President) ambassadors for the week and she blogged several times about our events. We also were retweeted several times on twitter and our Facebook posts were shared. 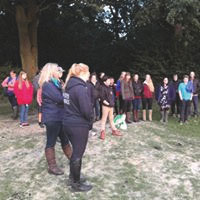