Pre Show took place in April and although it was a tad cold and windy the sun shone for the whole day. We started at Park Down Farm, by kind permission of Mr Graeme Denton and Mr Andrew Denton with Pigs and Dairy. Although the pigs was made slightly harder by their only being 2 pigs, the competitors all did very well in explaining to the judge why one was better than the other.

A huge thank you to Donald and Ali Brown who judged the pigs. The Dairy was also well supported and there were 4 very different dairy cattle used and all the competitors were clear and concise with their accurate placings and reasons. A huge thank you to Jerry Austin for being our judge. 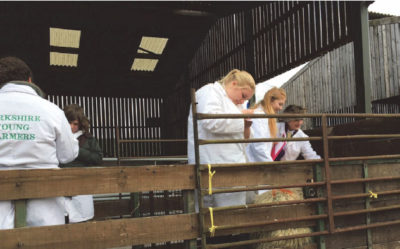 We then moved to Malthouse Farm, Brightwalton, by kind permission of Richard and Di Whidborne, where the competitors judged the sheep and beef. The beef produced some interesting comments from all competitors but they were all very different so there was a lot for them to comment on. Thank you to Dan Slade from Oxon & Thame Market & Buckinghamshire YFC for being our judge. The sheep also produced some interesting reasons but they all managed to get their placings spot on!

Thank you David Carlisle for providing the sheep and Brian Coventry for being our judge.

All a bit frozen and loosing feeling in our limbs, we all moved to Saddleback farm shop for some much needed food and warming soup. The clay pigeon shooting competition begun and although we only had 7 entries, all of the competitors thoroughly enjoyed themselves. Thank you to Giles Wilson-North for setting up the traps and to Adam Calvert for supplying and sponsoring the clays. Thank you also to John Gent for judging the competition. 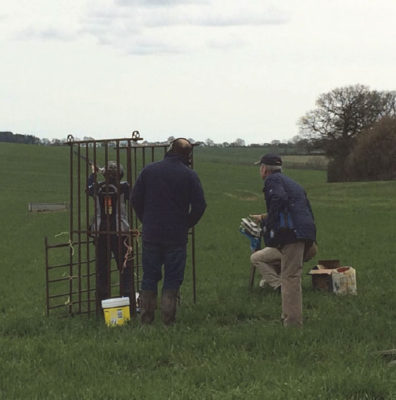 It would be lovely to see clay pigeon shooting done next year as well, as it was a great spectator sport and enjoyed by all those who took part!.

Finally thank you to all our stewards – Katharine Buchanan, Richard Pannet- Smith, Sandi Ackrill, Steve Ackrill and Richard Goodman – for their expert time keeping and organising the competitors for their reason giving. To Katherine Bunn, Anne Bunn, James Bunn and Di Whidborne, for supplying bacon sandwiches, making teas and coffees and making sure everything was ready at Saddleback farm shop for when we arrived. Thank you to Clare Whidborne for supplying the food at Saddleback farm shop and for letting us host the clay pigeon shooting and invading your shop on an already busy Sunday.

I hope all the clubs enjoyed it and going forward it would be lovely to see more new members compete. As one member said to me today (who wasn’t competing) – I’m going to do it next year as, as long as you are good at giving your reasons as to why you’ve placed them in your order you don’t need to know that much about the animals!. I think she summed it up for all our members!!!